The City Chambers, the headquarters of Glasgow City Council, remains a hidden gem in the heart of Glasgow. With stunning marble staircases and opulent portrait galleries, a visit to the City Chambers should sit at the top of any Glasgow day-out bucket list.

The City Chambers are a landmark of architectural and civic importance where new and old Glaswegians alike should feel welcome. The City Chambers regularly throws open their doors and invite the public to visit by offering regular guided tours in English and participating in Glasgow Doors Open Days. As part of Glasgow Doors Open Days 2019, the Scottish Civic Trust worked to help the City Chambers welcome even more Glaswegians by arranging tours in Polish and Farsi. These languages are particularly relevant to settled immigrant and refugee/asylum seeker/migrant communities, respectively. 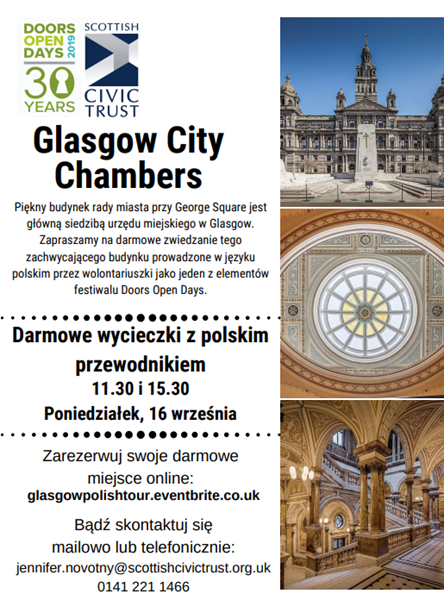 To organise these tours, the Scottish Civic Trust partnered with the Sikorski Society, Refugee Survival Trust, Scottish Refugee Council, Glendale Women's Cafe, Polish Consulate and a number of local integration networks to translate the City Chambers tour scripts and connect with volunteer tour guides. The week before Doors Open Days, the volunteer guides went on tours of the building with English-language guides, familiarising themselves with the tour route and looking over their translated scripts.

Each of the English-language guides offered their own version of the tour, with many interesting facts and anecdotes. Glasgow City Chambers was completed in 1888 after 5 years of construction, soaring over budget and costing more than £500,000.00. Despite being a city of industry and mass-production, the interior details of Glasgow’s City Chambers are hand-carved and hand-painted, including over 1.5 million mosaic tiles intricately laid by hand. The volunteer guides enjoyed getting to see the magnificent rooms, especially the Council Chamber, where formal council meetings take place, and the stunning 3-storey Carrera marble staircase. 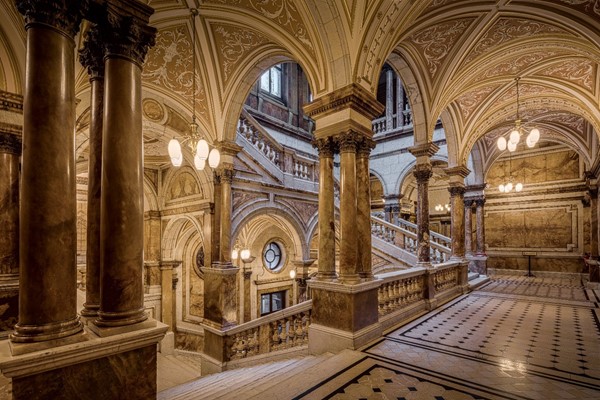 On the 16th of September Polish-language tours were offered at 11.30 and 15.30. Volunteer guides Sylwia and Paulina led visitors through highlights of the building, including the Banqueting Hall with its massive electric chandeliers (electroliers), and the Portrait Gallery, where portraits of past Lord Provosts are displayed.

The following day 2 Farsi-language tours were offered by guides Razieh and Armina. Razieh even narrated a short video clip of the Council Chamber.

This was a small-scale pilot project, but reactions from visitors were good. One visitor said that going on a tour in a language other than English gave them a sense of ownership of cultural heritage and made them feel included and welcome. Verbal feedback from one attendee was that they had lived in Glasgow for 20 years and had no idea that you could go inside City Chambers for a tour.

Find out more about free City Chambers tours here, and view the visitor guidebook here. We would like to run Tours in Translation again next year, adding more languages to the programme. If you are interested in getting involved, contact Jennifer.novotny@scottishcivictrust.org.uk.