For Tartan Week 2021, we celebrated all things Scotland with a programme of virtual tours, talks, interactive maps, podcasts and more.

Secret Soviet Map of Glasgow (Glasgow): Hear the fascinating story of the Secret Soviet Map of Glasgow. During the Cold War, the USSR undertook the greatest mapping operation ever known, covertly producing thousands of maps of countries, towns and cities worldwide. This talk highlights some peculiar features of the Soviet map of Glasgow and presents the first ever translation of the map's description of Glasgow's infrastructure, industry and government in the 1970s. ​(Video, 1 hour 20 minutes).

Paisley Abbey Drain (Renfrewshire): Go underground and plunge to the depths of Paisley Abbey Drain with this exploratory video. Only rediscovered in the 1990s, the Abbey Drain is one of Paisley's hidden gems and a site of continued archaeological interest. Inside, witches marks are inscribed on the stonework and artefacts found in the drain suggest what people ate and wore. (Video, 4 minutes). 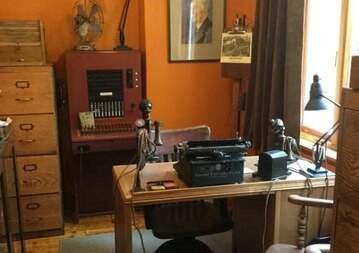 1940s House (Fife): Travel back in time to 1940s Scotland! Built in 1936, this unique home has survived with only limited modernisation. It is decorated with original furniture, appliances and furnishings, so you can experience the traditional 1940s atmosphere, from the crackle of the gramophone to the whistle of the kettle. (Video series, 14 segments). 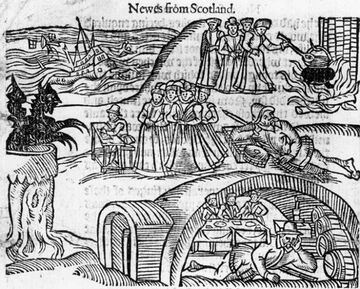 Inverkeithing Witches (Fife): Were witches always female? Why are witches depicted with cats, pointy hats and broomsticks? What sort of factors led to witch trials? Do we hear from the victims at witch trials? This podcast will answer these questions and more, and dive into Inverkeithing's history of witches. (Podcast episode, 17 minutes).

Campbeltown Heritage Centre (Argyll & Bute): Step into the gorgeous and historic “Tartan Kirk” to explore the story of the Kintyre Peninsula in Scotland. Find out what happens at a cooperage, hear about the “Campbeltown Navy” and take a trip to the “Singapore of the North”. (Video, 3 minutes). 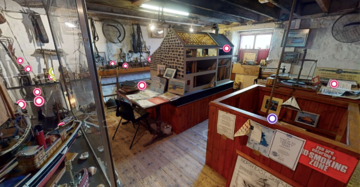 Sandhaven Meal Mill (Aberdeenshire): Peek around this 360-degree virtual tour to learn how oatmeal used to be ground in 19th century Scottish meal mills. All of the original mill machinery and furnishings have survived the test of time, including the electric motor and a built-in hinged top desk used by the miller. (Virtual reconstruction). 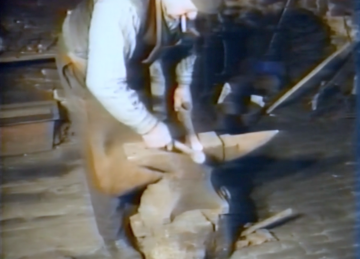 Cousland Smiddy (Midlothian): Virtually visit a 300 year old working smiddy where blacksmiths have been honing their craft from 1703 to the present day. This archival footage recorded in 1987 shows Kit Sked, a former Cousland Smiddy, hard at work at the forge making a horseshoe. (Video, 2 minutes).

Riddle’s Court (Edinburgh): We're raising our brows at Riddle's Court, Edinburgh's eyebrow lintel! This architectural detail likely marked where the royal party would have processed through the building to the banqueting room. See the eyebrow lintel for yourself & take a virtual tour of Riddle's Court. (Video, 13 minutes).

No 1 High Shore Banff (Aberdeenshire): Would you let an owl nest in your loft? Some old Scottish buildings, like 1 High Shore in Banff, included special windows in the roof to encourage owls to nest in the eaves. People liked having owls in their houses because they would catch any mice! Learn more about this 17th century house with this short video tour. (Video, 3 minutes). 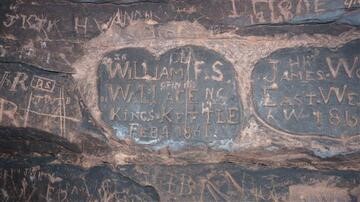 Wemyss Caves (Fife): Explore Pictish carvings and Victorian graffiti with these 4D tours of six coastal caves! Today, these ancient caves and the histories that they hold are under threat from the weather, industrial action and vandalism. (Virtual reconstruction).

Victoria Park (Glasgow): This Victorian public park is not your average green space. Nestled between the ferns and evergreens lies Fossil Grove, a unique heritage site that is a rare example of Victorian geoconservation. It holds eleven fossilised tree stumps from the Carboniferous Period, which was around 330 million years ago! (Video, 20 minutes).

Sgoil Chàirinis (Western Isles): Learn from local school children about the natural protective and nutritional qualities of seaweed in a short film about coastal erosion on the island of North Uist. Follow them along the shoreline as they wade in rock pools, explore archaeological digs and read accounts from local crofters. (Video, 5 minutes). 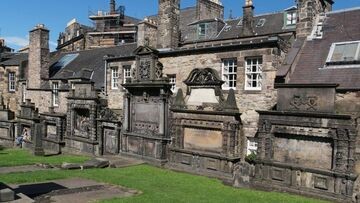 Greyfriars Kirkyard (Edinburgh): Virtually wander between the tombs and headstones of Greyfriars Kirkyard, considered by some to be “the most haunted graveyard in the world.” Hundreds of Edinburgh’s citizenry have been laid to rest within the cemetery’s grounds, including “Tom Riddle” - can you spot the other headstones that inspired characters in J.K. Rowling’s Harry Potter series? (Virtual map). 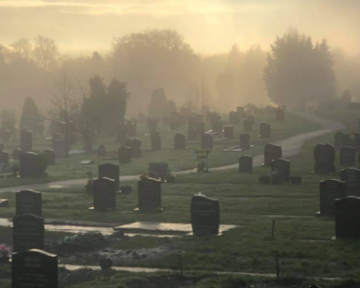 Cathcart Cemetery (East Renfrewshire): Cathcart Cemetery is home to 15,000 graves and is a stunning example of a Victorian "garden cemetery". Garden cemeteries were designed to provide a beautiful, leafy setting for the dead. Through an interactive map you can explore the final resting place of Margaret “Madge” Metcalfe who was a Glaswegian actress & the mother of famous Scottish comedian Stan Laurel. (Virtual map). 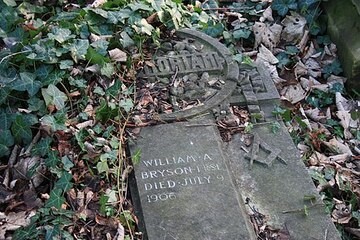 Warriston Cemetery (Edinburgh): Digitally explore this hauntingly beautiful cemetery and see if you can spot any spirits lurking amongst the ivy covered headstones. Perhaps you will spot the Red Lady, who is often sighted in the area surrounding Mary Ann Robertson's statue. (Virtual map).

Martin Laird (Orkney): A strong mythological influence is apparent in much of Martin's work and his Orcadian roots have inspired his creative process. From kelpies to giants, mystical tales pour from his sketchbook pages. Watch as preliminary sketches transform into the finished product. (Video, 5 minutes). 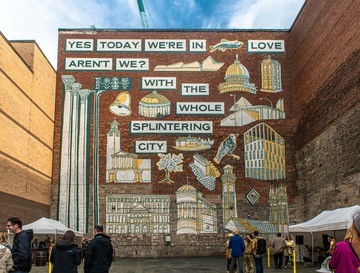 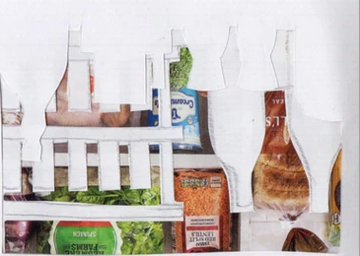 An Lanntair (Western Isles): What’s in your cupboard? An Lanntair, an arts centre on the Isle of Lewis, put out a call for folks to draw different aspects of their lives during lockdown. The resulting virtual exhibition is filled with heartwarming and hilarious sketches, including cupboards filled with toilet paper, an assortment of canned goods and… a live chicken? (Virtual exhibition). 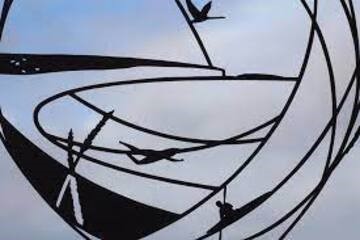 Leila Dearness Papercuts (Orkney): Leila is an award-winning paper cutter who takes inspiration from her home on Orkney, one of Scotland’s northernmost islands. Each of Leila's designs tells a story, which is expressed through the delicate and bold juxtaposition of the paper cutting medium. Watch as she guides us step-by-step through the paper cutting process, from inspiration to execution. (Video, 2 minutes).

Bannockburn House (Stirling): Step back in time at Bannockburn House! Have Anne take you on a virtual guided tour and regale you with all of the site's rich history. At one point the house was owned by A.E. Pickard, an eccentric Glasgow businessman known for driving around in his Rolls-Royce with a TV aerial on the roof of his car. (Video, 11 minutes).

Abbeys of the Scottish Borders (Scottish Borders): Take a trip to the Scottish borders to learn about the secrets held within four medieval abbeys! Abbeys were once the center of medieval life, and the communities of monks that lived there were pioneers in agriculture, coal mining, iron working and sheep farming. (Video, 57 minutes). 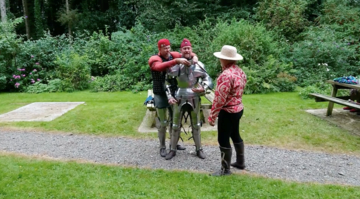 Sorbie Tower (Dumfries and Galloway): Get virtually suited and booted at Sorbie Tower! Sorbie Tower was built in the 16th century, and is near an artificial defensive mound. Known as the "Sorbie Motte", the defensive mound was once the site of an earlier wooden fort dating from the 1100s. Immerse yourself in the Tower's history and watch members of the Douglas Retinue suit up for battle. (Video, 28 minutes).