How to get there : Gilmour Street, Alexandria (off the Main Street). Category A listed.

The grand ornate red sandstone facade hints at something special. Once inside this is confirmed. Although now the Bonhill and Alexandria St Andrew’s Royal Arch Lodge, No. 321, it was actually built as the Ewing Gilmour Institute for Working Girls in 1888.

The "renaissance" main hall has a hammer-beam roof, one of only three examples of this kind (the other two being at Stirling and Edinburgh Castles). What does the symbolism of the lion head and iron ring signify? The corridor leading up to it has round windows, hinting at a Japanese influence, that look onto the rear garden.

Details and decor give an extraordinary Arts and Crafts ambience. Poetic quotes are engraved into the sandstone lintels and the lovely (canvas) murals by Harrington-Mann who was one of The Glasgow Boys, also with quotations, depict the ideals of young women. 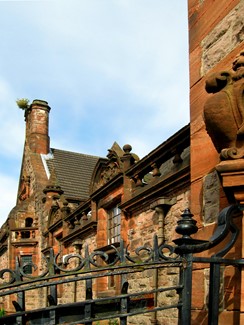 The library that once stocked books of instruction, now displays the pride of the Masons, also very interesting in themselves. And of course, a pub is prominent.

At the other end is the large kitchen. And below in the basement a function space. But something appears missing. Where did the girls live? After all we expect this to be a boarding school. A clue is better seen from outside. A "keep" or tower rises next to the main entrance. This is a spiral stairway to the large attic. While no longer accessible, it appears that there was a long dormitory up here.

And the reason for the Ewing Gilmour Institute for Working Girls?

Stretching out over most of the length of the Vale of Leven had been the extensive textile industry that we now now collectively as the Turkey Red. Working conditions were harsh and class differences absolute. Yet some great advances were eventually made in remedying the situation. This was one such altruistic project to raise the prospects of young women, the most discriminated against.