To mark the European Year of Cultural Heritage 2018 Scottish Civic Trust’s Doors Open Days is working in partnership with North of England Civic Trust (NECT), the EYCH UK Co-ordinator, to tour an exhibition across Scotland through the month of September 2018.

Doors Open Days and Scottish Archaeology Month deliver Scotland’s contributions to European Heritage Days during September each year, and are delighted to bring this touring exhibition to venues along the Antonine Wall, traveling from West to East across the country during the festival month of September.

The venues showcasing the exhibition are:

The Frontiers of the Roman Empire is a historical zone that spans Europe and 1,900 years of history. It has been designated by UNESCO as a World Heritage Site because it shows how this era shaped Europe as we know it today. The 2018 European Year of Cultural Heritage is all about celebrating a "common heritage" throughout the continent, and the Frontiers of the Roman Empire
does exactly that - it shows that "what joins us is greater than what divides us”. 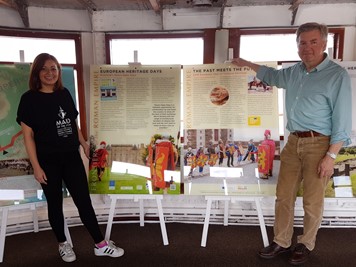 Graham Bell, UK National Co-ordinator for 2018 European Year of Cultural Heritage, and Amanda Beveridge, Office and Events Manager, Maid of the Loch (Loch Lomond Steamship Company) at the Maid of the Loch in Balloch, where our Roman Frontiers Exhibition begins.

The exhibition illustrates the historical overlay of the Frontier onto contemporary Europe, like the imprint of memory on the visible world.  The exhibition features quotes on what this means to local people and beyond.  Moving along the exhibition are vignettes providing glimpses into the life of communities today along the edge of Empire as far as Bulgaria (which in 2018 is hosting the Presidency of the Council of the European Union), about the influence of the past on their present, and opportunities of how for each of them, “what joins us is greater than what divides us”.

The exhibition concludes with two panels that summarise the message of 2018 European Year of Cultural Heritage: one panel will lift the veil of history to consider the legacy of the Roman Frontier on contemporary European society, also using the short blog format vignettes from professionals, students, schoolchildren and communities.

The final panel will illustrate the diversity of activities across the UK, continuing the vignettes format, that link people, place and insight. It will express the hope and challenge to extend the aims of 2018 in the UK into uniting the usually independent cultural and heritage sectors into one synchronised voice within our own society in a period of unprecedented transition, and in the chorus of Europe. 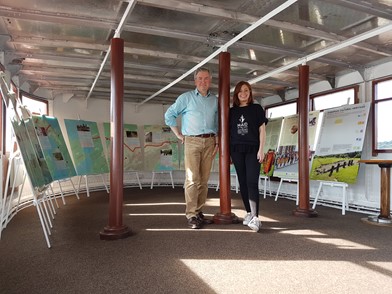